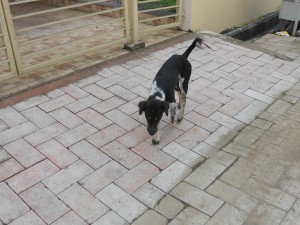 That dog looks pretty cute, right?  You might want to reach over and give him a little pet behind the ears.  But that would be a VERY bad idea.  He will bite you and he’s crawling with disease.  He’s a stray dog and there are about 50,000 of them in Bhopal, India.

Yep, you read that right.  50,000. The newspaper had an article about the stray dogs the other day.  Every day in Bhopal about 40 people are bitten by stray dogs, and most of the bites result in rabies.  It’s rarely fatal, but the treatment is painful and for the very poor it’s prohibitively costly. It is against the law to exterminate the dogs, but the city does have a sterilization team that goes around and tries to spay and neuter every dog they see.  The problem is that the team is only a few people and they only have one vehicle.  They are completely overwhelmed with work.

Dogs here are a nuisance and they are everywhere.  You literally can’t walk more than a few meters without seeing several stray dogs.  And they don’t look good.  Their fur is mangy, they’re underfed, their teeth are rotting and yellow, and many of them are lame in at least one leg.  The rich often have nice dogs as pets, but the ones on the streets are a different manner.  They yowl and scream all night long, even in our gated colony (they get in from the sides, which aren’t sealed off yet), they carry rabies and anthrax and other diseases, they wander around the streets and cause traffic problems, they urinate and defecate everywhere, and they stink.

I actually like dogs, though since I’m allergic to them I have to keep my distance, but here it’s a matter of survival.  And we have to constantly remind the girls not to get too close to them.  The LAST thing I want to do is deal with a rabies case with Madeline or Maia!  One more reminder of how very far from home we are . . .