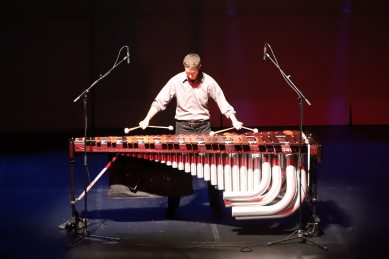 Payton MacDonald is a composer, percussionist (specializing in marimba), singer, and filmmaker. He explores the frontiers of art in a variety of settings, from Carnegie Hall to remote wilderness locations. He spent his early years drumming along with jazz records, while exploring the Rocky Mountains near his home in Idaho by foot, bicycle, and skis. Eventually he was shaped into a percussionist who plays marimbas, snare drums, bicycles, plants, pots and pans, and anything else that might produce an interesting tone. Along the way Payton discovered Indian classical music, and has studied that music for over 20 years. He often dreams up and executes large-scale, ambitious projects, such as his film Sonic Divide, which shows Payton pedaling his mountain bike 2,500 miles along the Continental Divide, while performing 30 new pieces of music, or his Sonic Peaks project, in which Payton hikes to the summit of hundreds of mountains and creates new music reflecting those experiences. He has released over 100 recordings. Payton studied music formally at the University of Michigan (BFA) and Eastman School of Music (MM and DMA), as well as with the legendary Gundecha Brothers (Dhrupad vocal) and Pandit Sharda Sahai (tabla). He teaches music at William Paterson University, and tours nationally and internationally as a percussionist, singer, and speaker.

Payton MacDonald (b. 1974, Idaho Falls, Idaho) is a percussionist, composer, improviser, singer, and filmmaker. He has created a unique body of work that draws upon his extensive experience with East Indian tabla drumming and Dhrupad singing, Jazz, European classical music, and the American experimental tradition. He works across multiple musical genres, often at the same time.

As a percussionist he was a founding member of Alarm Will Sound, a new-music chamber orchestra. Alarm Will Sound is currently regarded as one of the foremost new music ensembles in the country and MacDonald made five recordings with them, on the Nonesuch and Cantaloupe labels, and toured the U.S., Europe, and Russia. He was with the group from their beginning in 2001 to 2014, at which point he left to pursue other projects. MacDonald has also performed with the New Jersey Percussion Ensemble, Galaxy Percussion, and Present Music. As a solo marimbist, MacDonald has commissioned many works from other composers, including Charles Wuorinen, Robert Morris, Caleb Burhans, Don Freund, Peter Jarvis, Elliott Sharp, David Saperstein, Michael Udow, and Stuart Saunders Smith. To date MacDonald has released over 70 marimba recordings, producing the largest body of recorded marimba music ever.

From 1994-2004 MacDonald performed with Verederos, a flute and percussion duo. Verederos made two recordings under the Equilibrium label. He has also appeared as a soloist in England and Croatia, and performed and recorded with singer/songwriter Noe Venable. MacDonald has been a featured performer of his own music on festivals in Montreal (Voyages) and Minneapolis (Electric Eyes). He was a TEDx speaker at Elevate, TEDx Bozeman.

As an improviser MacDonald has recorded and performed with Elliott Sharp, Ras Moshe, James Ingelfritz, Billy Martin, Weasel Walter, Steven Crammer, Erin Rogers, Aakash Mittal, Peter Evans, Tim Feeney, Todd Sickafoose, and many others. He has revolutionized improvising on the marimba, by creating new music languages, interfaces with technology, and various innovative mallets and preparations to the instrument.

MacDonald is also a singer and learned Dhrupad vocal with the legendary Gundecha Brothers and further studies with Pelva Naik. Payton has performed as a Dhrupad singer at concert halls, yoga centers, and universities in India, the U.S., Europe, and Canada. He has performed at the Dhrupad Mela in Varanasi, India, as well as festivals in Chennai, Kolkata, and Bangalore. He has also appeared on the Ragas Live Festival in New York City, the Brooklyn Raga Massive, and the Dhrupad Days of Seattle and Wayne. He was awarded a Senior Fulbright-Nehru Fellowship to spend nine months in India studying with the Gundecha Brothers. He has performed with pakhawaj and jori drummers Pandit Akhilesh Gundecha, Roman Das, Dibyarka Chatterjee, Peter Fagiola, Dnyaneshvara Deshmukh, Tejas Tope, and Shawn Mativetsky.

As an educator MacDonald serves as a Full Professor of Music at William Paterson University, where he teaches contemporary music, percussion, composition, improvisation, and Hindustani music.

Payton MacDonald is a filmmaker whose films and music videos focus on the extreme and the avant-garde. His first documentary film, Sonic Divide, was placed in six international film festivals and won “Best Documentary” at the Helper Utah Film Festival and “Honorable Mention” at the Backpackinglight.com film festival. Sonic Divide has been screened dozens of times at festivals, universities, art galleries, and cycling events. His second film documents the rise of the New Jersey Percussion Ensemble.

Payton MacDonald is also an ultra-distance cyclist, specializing in mountain biking. He has completed numerous tours and races over the years, including the Great Divide Mountain Bike Route (2,500 miles), the Allegheny Mountains Loop (400 miles), the TransWisconsin (583 miles), the Vermont Super 8 (620 miles) and scores of overnighters and self-made routes, all self-supported, carrying his own food, water, camping gear, tools, and clothing. Payton likes putting in big days, riding from dawn to dusk, but he also likes stopping at beautiful places and making music, listening to the world, and feeling the vibrations of our remarkable and precious planet.