I’ve been passionate about motorcycles since I was five years old and I first saw Ponch and Jon riding their motorcycles in CHiPs. After a lot of begging and pleading on my part my parents eventually broke down and bought me a little bike from a guy down the street. It was something he cobbled together in his garage from various parts, including a pull-string lawnmower engine, wheels from a wheelbarrow, and some kind of dicey braking mechanism. It didn’t go very fast or very far and was tough to start, but I loved it nonetheless and rode it constantly.

Eventually I moved up to a bona fide dirt bike when I was about eight or nine years old. We kept it at a cabin we had near Victor, Idaho, and I have many fond memories of tooling around on it on the gravel roads up in the mountains.

In high school my Dad taught me how to ride his 1973 Kawasaki kz400, which looked like this:

God, I loved that bike, and I still do. The UJM platform is my favorite style of bike (though I’ll admit the Triumph Bonneville is a shade closer to motorcycle perfection aesthetically to me than the Japanese bikes). I rode that bike off and on for years. When my college girlfriend Jessica (now my wife) came to visit during the summers I would put her on the back. (I still think driving a beautiful woman around on a motorcycle is one of the most fulfilling things a guy can do . . . )

I got out of riding for a while when I finished college and was busy building my career, and eventually my Mom sold that bike. I was heartbroken, but by that time I was getting back into riding and my own bike.

I have to credit one of my Indian music gurus, Pandit Akhilesh Gundecha, with getting me back into riding full steam. When I was in India for nine months in 2013 with my family on Fulbright he set me up with a little Honda Activa 150 scooter. It looked like this: 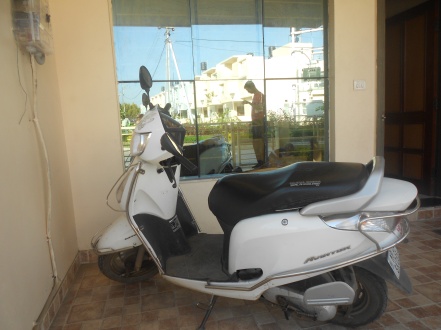 There she is, parked on our porch in India. What a fun little bike! I rode that thing every single day, sometimes over an hour a day since we lived 20 km from my teachers’ school. When I got back to the U.S. I bought my own scooter, a 2010 Honda Elite 110: 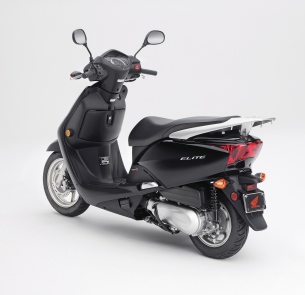 Also a fantastic little bike. I put over 4,000 miles on it–mostly commuting to work–before deciding to sell it for something a little bigger. In 2017 we moved to a different town and the bigger roads are all 40 or 45 mph zones, which means everyone drives at least 50 or 60 mph and that bike is just too small. So I picked up this used 1992 Honda CB750 Nighthawk: 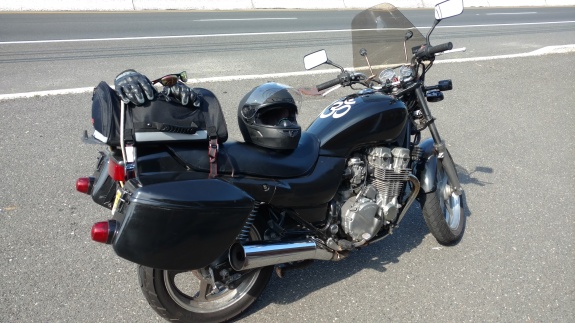 I put over 10,000 miles on that bike in less than two years, including three trips up to Montreal and numerous weekend rides. I fell in love with motorcycle touring and decided to upgrade to a more modern bike, so I eventually sold the Nighthawk and picked up this beautiful used 2009 Kawasaki Versys 650: 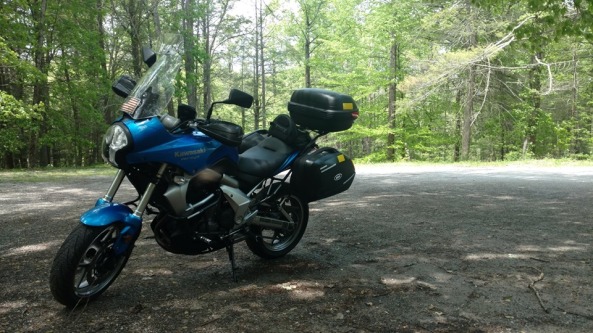 That’s my primary bike now. As you can see from the photo I’ve got it decked out for touring, with full luggage, windshield, hand guards, engine guards and highway pegs, etc. I’ve put over 23K miles on it in two years. What a lovely ride. Sporty and nimble, but comfortable. The power band is even across the board, but really comes alive after 7K RPM (it redlines at 10.5 RPM). It’s the perfect blend of sportbike and touring rig. I plan to keep that bike for a long time and put a lot of miles on it.

I love going down to the beach early on a summer morning on that Versys. I’m on the road by 5:30 a.m., and I have the interstate to myself. Here’s a shot from a recent visit:

But of course, when you’re as obsessed with motorcycles as I am there’s no reason to just have one. For a time I also had a little Suzuki TU250X, but again I found that to be a little small for where I live, but here’s a photo of her:

so I sold that after a few months and got a nice used Yamaha R3.

That bike was sweet. Some people call the 300-level sport bikes “beginner bikes”, but that’s foolish. That bike can rip to over 100mph with ease (which is more than enough for public roads), and it’s nimble and lithe on twisty roads. I used it for commuting to work and weekend rides up in the Poconos or Catskill Mountains. Here’s a shot from a recent ride: 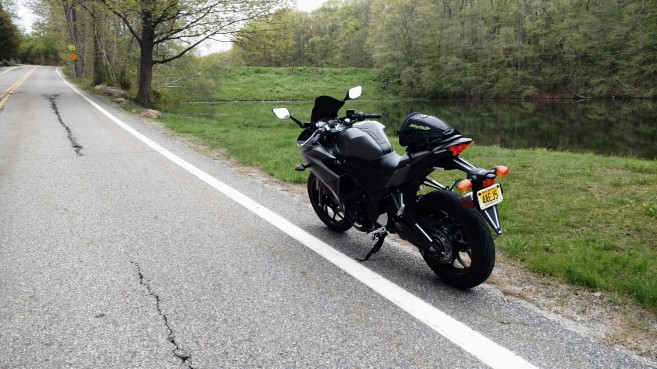 But, as things go, after a few  years on the R3 I really wanted to experience a large cruiser, so I sold that bike and picked up a nice used 2004 Kawasaki 1600 Mean Streak. It had some custom work done on it, too.

I still have that Vulcan and I love it.

I regretted selling the R3 after a while, though and I found a very good Ninja 400 for an excellent price (used of course, I always buy used) and I picked that up. The Ninja 400 is much like the R3, but with a bit more power and the torque profile is more even, so there’s more usable power right on tap. It’s also lighter, so it’s a quicker, more nimble bike. Amazing ride. Here she is:

I pretty much ride 10 months a year, about five days a week. There is nothing quite like the feeling of freedom and enhanced mental focus and intensity of riding a motorcycle. Although it lacks the transcendent experience one achieves from moving under one’s own power like on a bicycle or by foot,  the connection between man and machine is very deep. All four limbs are involved with controlling the vehicle, and you are connected to those pistons firing up and down thousands of times per minute, ebbs and flows of power under your body, controlled with the subtlest of wrist motions and shifts in body weight. The ride becomes an all-consuming, overwhelmingly intense experience in the mind, body, and soul. I’ve written elsewhere about how I manage the dangers of riding motorcycles. It’s a manageable risk, and well worth it considering the spiritual and emotional benefits of riding (not to mention the ability to avoid traffic and parking problems).

Sometimes people ask me how I reconcile riding motorcycles with performing experimental music, but they’re really not much different from a mental perspective. Both disciplines require an intense level of focus that I find hard to achieve anywhere else. I think a lot of folks have an image of motorcyclists as “bad boys” with tattoos, drinking problems, and super loud bikes, with no helmet and a nasty attitude. That stereotype exists for a reason as those guys are unfortunately out there, but there are just as many other riders like me who take our safety seriously, are respectful of other drivers, and lead a clean lifestyle.