The good folks at Marty’s Reliable Cycle have several great routes posted on their site HERE.  Marty’s has become the nexus point for all things bikepacking in New Jersey.  They’ve been hard at work hosting clinics, putting together group overnighter rides (which are a blast, I went on one a few weeks ago), and doing the hard work of developing routes and maintaining trails.  I strung together two of their routes, the Schooley’s Mountain Bike challenge and the Fall Bikepacking Adventure route.  Thanks to Jesse and Megan for their hard work on these. 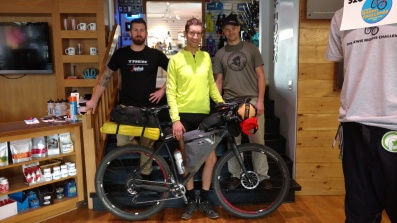 I started at the Morristown Marty’s location and hung out a bit with Jesse and Dennis.  Jesse warned me that the Schooley’s route would be slow going in places.  He was right about that.  The route mostly follows the Patriot’s path, which ranges from gravel to pavement to gnarly single track.  I was only a few hundred yards into the first segment of gnarly single track and I started to wish I brought my front suspension fork. 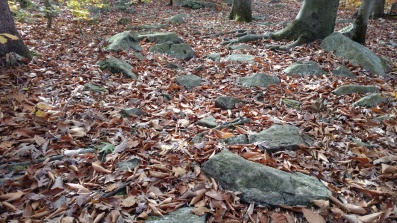 The singletrack is dominated by rock gardens like what you see above, which are tough to negotiate on any bike, but a fully-rigid, full-loaded 29er is exactly the wrong tool for the job.

But there are some nice flowing sections, like this: 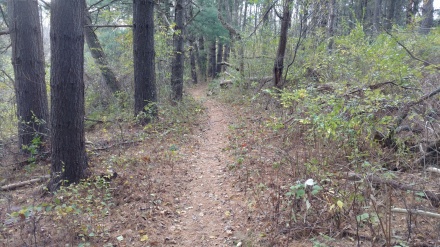 Staying on the trail can be tricky, though, especially with all the leaves down.  Do you see a trail in the photo below?

Hard work is always rewarded, though, and there are also some nice views.

The Schooley’s Mountain Bike challenge route is about 26 miles so I thought it would only take me about three hours, but it was around four hours before I finally rolled in to the Marty’s Hackettstown store.  I spent some time hanging with Mike, Megan, and the other awesome folks there, and then I got going.  By this time it was getting dark and cold and I was getting tired.  Originally I was planning to ride all the way to Stokes State forest from Hackettstown, but given how late it was getting I decided to camp at Kittatiny instead.  I always feel some weird “hard-core bikepackers guilt” when I make those kinds of mileage adjustments, but the single track was so much slower and harder than I expected that it was really the best decision.  I was starting to get in to The Slog zone.  I’ve spent thousands of hours there before, but I wasn’t really in the mood for it on this trip.  I wanted a challenge, but I always wanted to relax a bit.

The hike-a-bike gets tiring, as does the constant on and off the bike, lifting over deadfall: 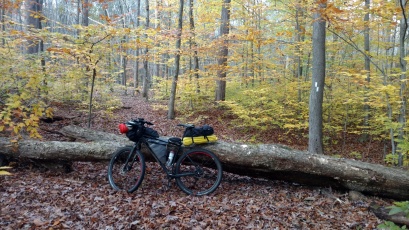 As it turned out I had a phenomenal full moon once I got to the campsite (which was empty) and once I pitched my tent, I spent some time singing Raag Chandrakauns, a lovely late-night pentatonic raga inspired by the powers of the moon.

I was up early and pedaling back home again before dawn.  I took my time, stopping at several streams and lakes to sing and listen to the sounds of the water.  I have a big project brewing in my mind for next summer in Vermont that will involve bikepacking, film, and music, like the Sonic Divide.  I meditated on that project as I pedaled home. 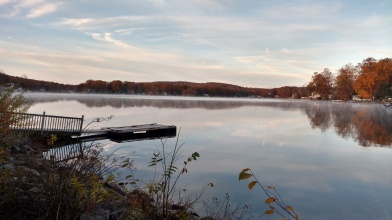 Check out the nice flowing water in the back of the photo below.  That was a lovely spot for singing. 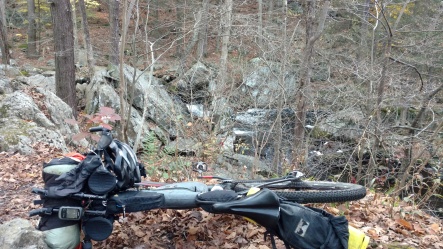 I also spent time thinking about my rig and what I would do differently.  Next time I will use a front suspension fork and a seat-post dropper.  A full-suspension bike would be even better for the single track, but then I would lose the space in my frame for my frame bag.  It’s always a compromise for routes that have a mix of surfaces.  The suspension is overkill for the pavement and gravel sections, but once you’re in the middle of the gnarly singletrack you wish you had it.  I think just running the front fork and the dropper post would be the sweet spot for this route.  I’ll have to carry a backpack, though, for the stuff that would ordinarily go in the saddle bag.

Overall it’s an amazing route and one I look forward  to doing again.