This past weekend our family visited Agra and saw the Taj Mahal, Agra Fort, “Baby Taj”, and Fatapuh Sikri.  It was both an exhilarating and exhausting two days. 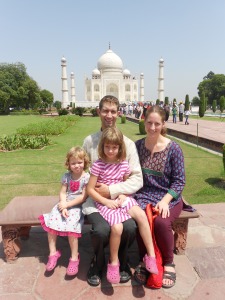 Tourism is hard in India, especially for white foreigners.  Once you’re inside the gates of the castle or mosque or whatever it’s great, but getting there is difficult.

What makes it especially hard are the touts.  Touts are people who are trying to sell you something.  This ranges from guide services to necklaces to postcards to camel rides to whatever.  They’re poor and they’re desperate for business so when they see you they latch on to you like vultures on a carcass.  They are unbelievably tenacious, and even if you’ve already hired someone to guide you around they still swarm around you.

And carcass is about how we felt by the end of each day.  Not only did Jessica and I often have four or five touts on each of us, shoving various junk in our faces and pushing us extremely hard to buy it (“Just 200 rupees, sir!  Just 200!  . . . Okay, just 100 rupees!  I no cheater!  Good quality!  Just 100 rupees!”), but we were dragging two young, bewildered children with us, neither of whom had the faintest interest in the subtleties of the carvings on the pillars in Agra Fort.  Their primary interest was the ice cream we used as bribes to get them through the day.

And we were determined to see these magnificent sights so we were liberal with the ice cream.  On Saturday they devoured no less than THREE ice creams, as well as various toffees, chips, cookies, and other assorted junk food.  By the early afternoon I could see that all the sugary crap was sending them into a crack cocaine-like downward spiral of cravings and quick fixes and aberrant behavior, but we had no other choice.  It wasn’t like fillets of salmon and quinoa were going to suddenly appear at the food stalls.  The other food offerings were spicy and hygienically dubious.

So we got them through hour after hour with bribes of junk food and lots of reassurances of how well they were doing.  And all in all they did quite well.  I mean, it was HOT.  Over 100 degrees with a fierce sun.  Considering the touts, the heat, and all the walking, our girls did pretty well.  Mom and Dad were completely burnt by the end of the day and fed up with India in a way that only a white tourist here can understand, but glad that we had seen the sights.  The beauty of the Taj Mahal is simply astonishing.  And there really is nothing like seeing it in real life.  I was also blown away with the Agra fort, which at various times served as a military garrison and a castle for the ruling elite.  The feeling there is truly one of timelessness.  The amount of detail–balanced with simple but sturdy large designs–created a true feeling of wonder in my heart. 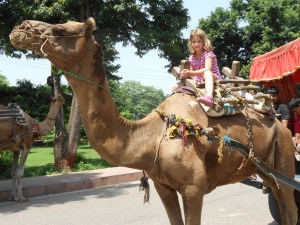 But our next trips will include very little sight-seeing and much more doing.  We realized that with two young kids no matter how fanciful and fun you try to make the monuments (“Madeline!  Let’s pretend this is your own magic castle!”), they’re just a bit too young for this sort of thing.  The part of the day they enjoyed the most was when Madeline got to climb up and ride a camel.  It’s all about active learning at their ages.  My guess is that in ten years will Madeline will have no memory of the Taj Mahal, but a nice one of riding that camel.  Fortunately I’ll remember both quite fondly, and most probably the heat, the touts, and the exhaustion will have faded away.

One thought on “Camels and Touts”